skip to main | skip to sidebar

In Perfect Circle I mention the relationship between towns an villages on the banks of the Zaire River. In the novel I write about Shawaiti, a village and the Colonel Ebeya. Shawaiti is fictional, but the Colonel Ebeya isn't.

From to there’s 800 miles of . The Colonel Ebeya is a barge train that runs between both cities, a trip that can take anywhere from 20 to 40 days. The Ebeya stops at many places in between. Villagers paddle their canoes to the Ebeya to trade city goods and medicines for "jungle meat" (monkeys, pangolins, etc). 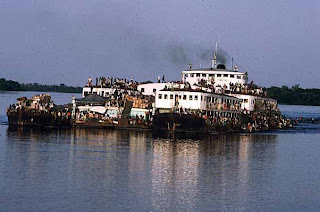 The DRC. Is a difficult country to visit. Besides shufta (bandits) there are lots of soldiers and policemen out on the prowl. They get paid very little and infrequently, therefore, tourists provide a second income.

Unless you speak good French, Lingala, Kikongo, Tshiluba, Mongo, Lunda or any other of the DRC languages, be ready to dole out backsheesh (bribes) regularly.

Just heard from my agent that Perfect Circle sales figures will be out soon. She sent me a photograph of the Bantam's strong room where accountants are sorting out my cut. 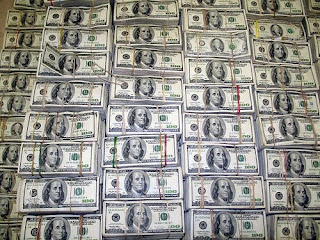 I'm dissappointed. It doesn't look like much, does it?
Posted by Carlos J Cortes at 4:32 AM 1 comment:

Chuck, a reader, posted this priceless piece of advice in Amazon:

I thought this book sounded good when I read a short synopsis. It didn't disappoint. Great story and good character development. I hope the author does NOT sell to Hollywood because they will massacre this fine story. I recommend highly.

Thank you, Chuck, but I would sell to Hollywood without blinking an eye. An old adage comes to mind: "We are hookers, but demand payment in different kind."
Posted by Carlos J Cortes at 11:24 PM No comments:

I’ve been buried under tons of work. After a working stint in , I’ve prepared a proposal for my next novel “Light Bondage,” read my partner’s work and generally cleared the decks for another writing season.

The publisher hasn’t released sales figures for , so I have no idea how it’s faring, but I suspect sales fall short of the million mark.

A newsletter will follow soon to keep you updated.

In the third chapter there’s a paragraph:

‘The sheer incline, like the rest of the trail to Dulce Nombre de Culmí, is covered in dense groves of pine and oak, with a scattering of other trees——splendid mahoganies, Spanish cedars, balsa ceibas, guayacos, rosewoods, and chicozapotes. The forest formed a tunnel, usually soft-lit through the leafy canopy but now darkened by the torrential rain. On the floor and between the stones, water trickled in muddy streams toward the valley over a mile below.’

The description may not be Pulitzer Prize material but it’s as accurate as I remember from a wretched trek through the Agalta Cordillera in Honduras. I bet you recognized most of the trees: pine, oak, mahogany and cedar are common enough. Balsa ceibas, even if the name doesn’t ring familiar, you might have seen pieces in the hobby section of some stores: feather light strips of wood model engineers use to build aircraft or ships. But, what of the chicozapote?

The sap of this splendid tree was milked and known to Aztecs as ‘chicle’; women and young folks chewed it to clean their teeth.

As the popular story goes, in the year 1866, Mexican general Antonio Lopez de Santa Ana gave a kilogram of chicle gum to Thomas Adams, a dentist in New York City. After a year of experimentation, Adams marketed his first commercial chicle chewing gum, and the chicle industry was born.

The primary ingredient in chewing gum was the latex sap of the chicozapote tree. This sap was collected by native workers who came to be known as chicleros. They collected the sap by using a machete to cut v-shaped diagonal slashes in the bark of the tree. Latex would run down the slashes into bags at the bottom of the trunk, which were picked up by the chicleros the next day.

After heating the latex to reduce the water content, it was formed into blocks and sent to factories in the United States. From about 1880 until the late 1940s, chicle was the most important use of the chicozapote tree. The industry declined after World War II, when cheaper synthetic substitutes were found for chicle, but has never stopped entirely.

There you have it. Next time you chew gum, remember that the orginal stuff was milked from trees.
Posted by Carlos J Cortes at 7:52 AM No comments:

Sadly, no posts for a full week. I’m off to London, to visit the pussycat.
Posted by Carlos J Cortes at 5:33 AM No comments:

Toward the end of the novel, I describe a piece of gazelle skin where Piri Reis, an admiral of the Turkish navy, drew a map of the world in 1513.

The Piri Reis map shows the western coast of Africa, the eastern coast of South America, and the northern coast of Antarctica. The northern coastline of Antarctica is perfectly detailed. The most puzzling however is not so much how Piri Reis managed to draw such an accurate map of the Antarctic region 300 years before it was discovered, but that the map shows the coastline under the ice. Geological evidence confirms that the latest date Queen Maud Land could have been charted in an ice-free state is 4000 BC.

Further and more accurate studies have proven that the last period of ice-free condition in the Antarctic ended about 6000 years ago. There are still doubts about the beginning of this ice-free period, which has been put by different researchers everything between year 13000 and 9000 BC.

The question is: Who mapped the Queen Maud Land of Antarctic 6000 years ago?

In 1953, a Turkish naval officer sent the Piri Reis map to the U.S. Navy Hydrographic Bureau. To evaluate it, M.I. Walters, the Chief Engineer of the Bureau, called for help Arlington H. Mallery, an authority on ancient maps, who had previously worked with him. After a long study, Mallery discovered the projection method used. To check out the accuracy of the map, he made a grid and transferred the Piri Reis map onto a globe: the map was totally accurate and portrayed the Earth’s circumference with a precision of 50 miles. He stated that the only way to draw map of such accuracy was aerial surveying.

The Piri Reis map is something which is not supposed to exist: the relative longitudinal coordinates are accurate and the first instrument to calculate longitude was invented in 1761 by the English John Harrison.

In fact Piri Reis himself admitted he based his map on older charts, such as
the "Dulcert's Portolano", year 1339, where the latitude of Europe and North Africa is perfect, and the longitudinal coordinates of the Mediterranean and of the Black sea are approximated of half degree. Then there’s the "Zeno's chart", year 1380. It shows a big area in the north, going up till the Greenland. Another amazing chart is the one drawn by the Turkish Hadji Ahmed, year 1559, in which he shows a land stripe, about 1600 Km. wide that joins Alaska and Siberia. Such a natural bridge has been then covered by the water due to the end of the glacial period, which rose up the sea level.

Oronteus Fineus was another one who drew a map of incredible precision. He too represented the Antarctic with no ice-cap, year 1532. These maps show Greenland as two separated islands, as it was confirmed by a polar French expedition which found out that there is an ice cap quite thick joining what it is actually two islands.

Although it doesn’t disturb my slumber one bit (I’m usually asleep before my head hits the pillow), I wonder who was the cartographer from whose measurements these maps sprang and how on earth did he manage such accurate readings.
Posted by Carlos J Cortes at 1:40 AM 1 comment:

Carlos J Cortes
I was born in Madrid, Spain, on Valentine’s Day, but over the years I’ve lived in more than 32 countries. I’ve spent most of my life enlightening the lives of others—not as a man of the cloth—but as a light scientist and designer, a fiber optics systems design engineer and now writer. I live in Barcelona and hope to immigrate to the United States to join my family. I grew up on the streets with the salt of the earth and over the years worked as an altar boy, musician, waiter, lightening rod installer, site engineer, salesman, dishwasher, night porter, consultant, and sundry other high-level executive jobs. At present I’m Chief Technical Officer at a Norwegian group of companies. My hearing is impaired from being near a bomb at too close quarters. I’ve spent a stretch in an African jail, crossed the Israeli-Egyptian border inside the trunk of an Israeli car, drove a taxi in Rio de Janeiro and clocked 200,000 miles in a single year on one of my frequent flier cards.